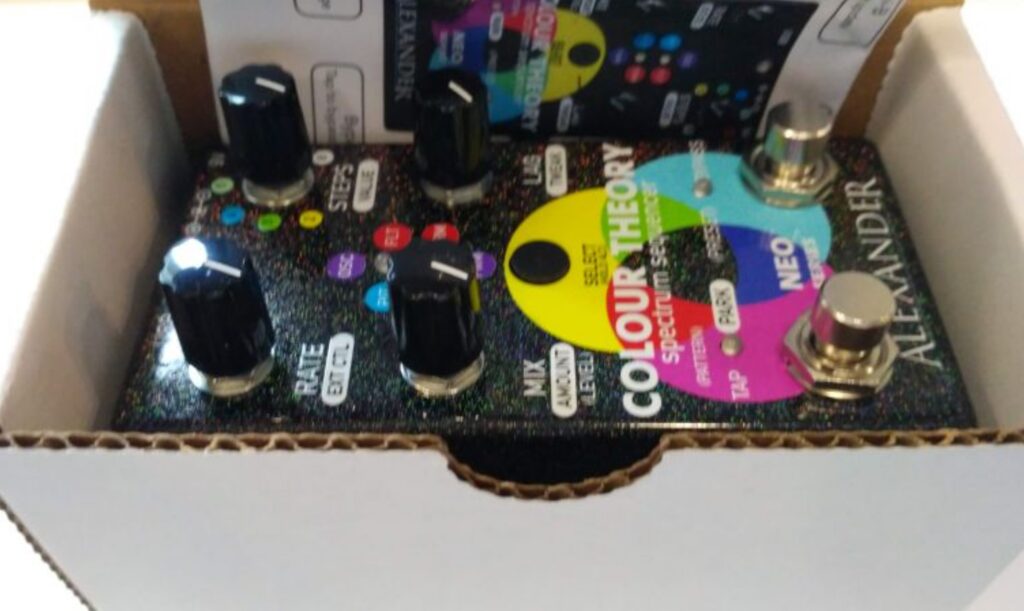 The Colour Theory. Each step in its sequence is a new pathway to adventure, each new colour is part of a palette of mystery. Every moment brings a new surprise, as the patterns cycle and interact.

The Colour Theory combines a versatile eight-step sequencer with a powerful effects processor, creating rhythmic combinations seldom heard outside of a rack of synths. It’s small but mighty, utilizing the Alexander Neo Series technology in a completely new way.

What is a Step Sequencer?

The Colour Theory allows you to preset different values for its effects – each step of the sequence may be set to any values you like, so as the sequence plays the effect changes automatically. You can set the Colour Theory to play a series of tones in OSC mode, or to open and close a filter in FLT mode. The only limit is your own imagination.

The sonic scientists at Alexander Pedals have been working overtime to cram the most pedal into the smallest box, and they now present the Neo Series! Each Neo Series pedal incorporates an advanced 32-bit microcontroller adding presets, expression, and MIDI capability.

The Neo Series pedals are small but mighty! Imagine having a single pedal on your board that can access up to 4 separate preset tones with a touch of your toe. Connect an expression pedal to “morph” between two distinct settings for each preset for dynamic real-time effects. Or connect the Neo Footswitch to enable your choice of preset select, tap tempo, or start / stop the sequence in real time.